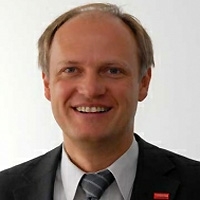 LAMA Board Member Christian Mundigler joined BRP-Powertrain GmbH & Co KG (formerly BRP-ROTAX) in July 2007. As Manager of Rotax Aircraft Engines & Kart Business for ROTAX Aircraft Engines Christian is responsible for marketing and product management. Before he worked as a key account manager in the electronic industry for well known OEMs in automotive, industrial and consumer electronics.

Holding a master degree in economy and mechanical engineering from the Technical University of Graz / Austria he started his career in the solar industry. One of his first projects was to realize the second biggest thermal solar plants in Europe at that time with 1,300 square meters in Helsinki / Finland in cooperation with the European Community. Following his dream of becoming a pilot Christian Mundigler passed his license for hang gliders as a student in 1991 and  recently obtained his Private Pilot license. While raising a family with his wife Rosemarie, they have two children, Dominik and Katharina, Christian’s recreational focus was flying model aircraft. Other hobbies are gardening, playing the guitar and karate.

Meanwhile more than 220 aircraft manufacturers are using 2- and 4-stroke ROTAX Aircraft Engines supported by a worldwide network of ROTAX authorized distributors and their service- / repair centers in more than 150 points of sale.