Founded in 2017 by uShip founder Matt Chasen, Lift Aircraft is busy designing an eVTOL aircraft that is Part 103 compliant. In January 2018, the prototype flew, in July there was an unmanned flight, and in October came the first manned flight. That’s a pretty impressive year for them!

Since then, they’ve continued to develop the aircraft for both civilian and military use. You can learn more about the company here.

Thanks for your support, Matt and team! 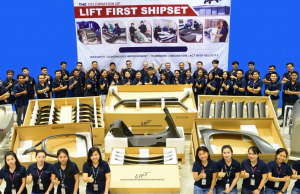