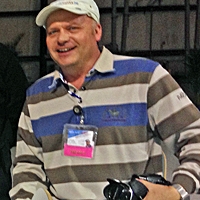 Marino Boric joined the LAMA board of directors in 2021 after a unanimous vote by the current board members.

Marino is very well known in the light aviation industry. As a longtime journalist, he has extensively covered aviation of all kinds but with a particular expertise in precisely the soft of aircraft that LAMA represents in its work with government aviation agencies and others. Marino has traveled worldwide flight-testing Light-Sport Aircraft, Experimental aircraft, and certified aircraft. His writing has appeared in American, European, and Chinese publications.

More than simply a writer and journalist, Marino is hands-on, having built several Experimental aircraft. In addition, he is an editor of the World Directory of Leisure Aviation catalog, a massive publication listing aircraft of every type in the light aviation. Marino’s enormous experience is very useful to this project. His work can be found on his journalism website.

“As a freelance journalist, photographer, and editor,” Marino wrote, “I convey the magic of flying and technology in the media and at trade fairs.”

Marino started early in his fascination with aviation. He learned to fly at the age of 15 and earned his glider license at 16 years old. He later graduated as an aeronautical engineer, acquired his Private Pilot license, then his Commercial Pilot license and Instrument rating. He also flew as a military pilot.

“As a board member, I am pleased to support LAMA, the Light Aircraft Manufacturers Association, because transparency in the certification process, and safety in the LSA area are important to me,” Marino clarified. “LAMA helps its international members — the manufacturers of Light-Sport Aircraft — to create transparency, and supports producers with a global harmonization of certification guidelines, especially with regard to national legislators.”

“My intention is to help the manufacturers in the process of certifying their new aircraft according to the LSA rules as they are accepted in many countries,” Marino said. “This should ultimately provide a greater variety of models on the market. In addition to present activities, LAMA’s safety initiative work towards an increase of safety in the LSA area.”

LAMA and its existing board of director are very pleased to add Marino to the LAMA board. He will concentrate work on European manufacturers whom he regularly visits.